After halving, the Covid19 pandemic and the global economic crisis – Technical Analysis & Forecast on Bitcoin On May 12, 2020 there was a much anticipated event and a particularly important moment for Bitcoin: the halving or halving of the rewards to the miners (the producers of BTC).
This is the third halving in history, which has halved the “rewards” of miners from 12.5 to 6.25 BTC per block.

BTC is the first crypto-currency by capitalization and the whole world was expecting a quote storm similar to the two previous halvings.
Many assumed a financial earthquake in difficult times for world markets and the economy of all nations.

Moreover, the scenario was complicated by extraordinary geopolitical tensions… in fact, after the riots, protests and repression in Hong Kong, today’s news: “armed clashes on the border between China and India with several dead soldiers”. Is a world war about to begin?

To get an idea of what could happen in the coming months at the prices of the first crypto-currency for capitalization, we can go back a few years and observe what happened in the previous halving, dated November 28, 2012 and July 7, 2016. 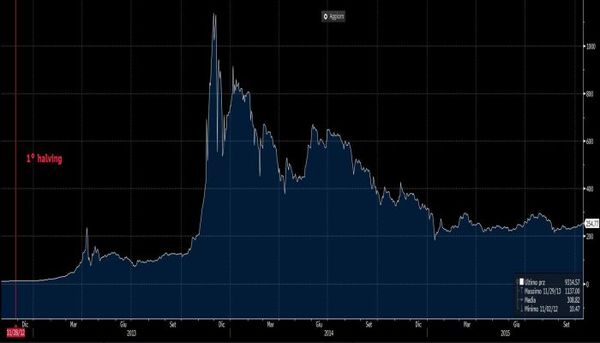 From this excess, prices began to correct downward significantly, so that by 14 January 2015 they had returned to $183.07.

From this level started a slower and more constant rise than the previous ones, until the second halving. 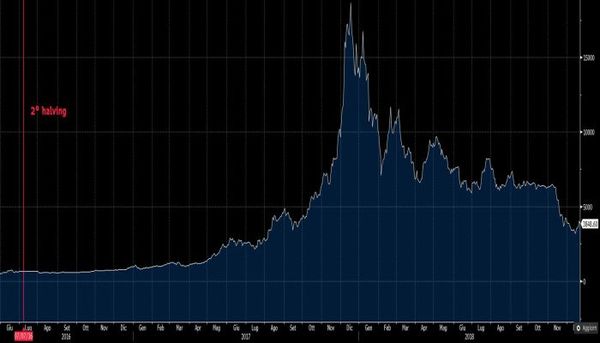 As everyone can see, the behaviour of prices in the two halvings is very similar: there is a peak followed by a rather strong downward phase and the rise starts again at a slower pace.

However, some considerations must be made.

Firstly, the economic situation is profoundly different from 2012 and 2016, as the whole world is certainly entering a recessionary phase, for the reasons set out initially and other important factors:

A) the trade war between the US, China and the EU which sees everyone against everyone;

B) the collapse in the value of oil (the cost of a barrel of crude oil has fallen below zero);

C) the uncertainty of the re-election of Donald J. Trump in a fierce fight against the Democratic Party, the “deep state” and the mainstream media: only against all, in a duel to the death, will he succeed in convincing the North American people (of the US 1st world power) for the second time ?

Analysts and economists predict a financial and social catastrophe worse than the one started in 2008 and not even concluded.

In addition to this, the rise following the 3rd halving (May 2020) and that of the “peak” (although always high) is much lower than the historical precedents.
More than a month after the event, it could be said that the extent of an upward phase after the 2020 halving may be even more limited than the previous ones. 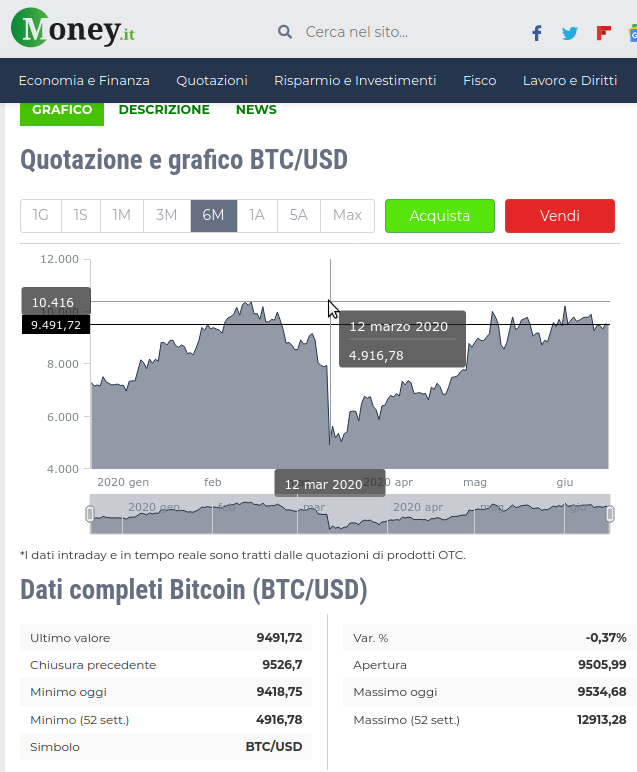 Finally, we must admit that there are only two historical cases from which to draw an example, and to make predictions based on only two such events would be risky.

Bitcoin: the levels to be monitored after the 3rd halving

On the contrary, unexpected drops below $7,000 would be interpreted negatively: this is because the support provided by the trend line drawn with the highs of March 12 to those of April 7, 2020, and by the static level expressed by the lows of the

On the contrary, unexpected descents below 7,000 dollars would be interpreted negatively: this is because it would violate the support provided by the trend-line drawn with the highs of March 12 to those of April 7, 2020, and the static level expressed by the lows of May 13, 2019.

In conclusion: at the moment Bitcoin is an open bet…
(old Italian proverb: “Who will live will see!” )

If you want my personal opinion: Me following the BTC phenomenon since 2012… I think that, at the current exchange rate, it is still very convenient to buy BTC (even if I would have preferred to buy them a couple of years ago at just over 3000€ to spend them now)…

Greetings to all and see you next article…

For those who do not know and/or are not familiar with BTC and Crypto-currency I recommend the following articles, which illustrate how you can practically use these new technologies in simple and common everyday activities, (get them, manage them, spend them even with debit card, exchange them and/or convert them in all traditional currencies):

If you want to know more continue reading these articles that teach you how to use Bitcoins read some of my latest articles on cryptocurrency and Bitcoins:

Bitcoin play in absolute anonymity with more winnings without taxes

Cryptocurrency the coins of the future? i.e.: how to make bitcoin bets

If you want to find more info: in these two articles is clearly explained in a very simple way how to use Bitcoins…

Greetings to all and goodbye to the next article…